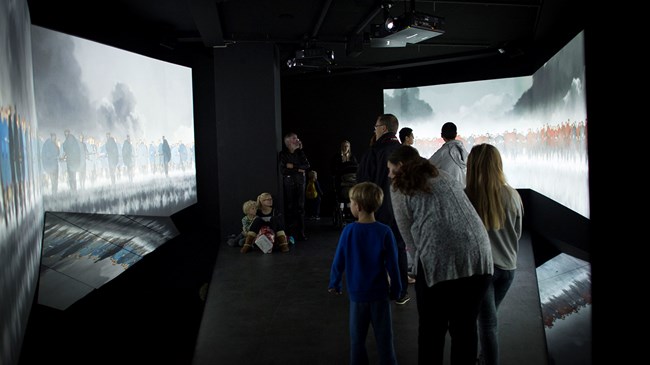 Sound design for the installations “Slaget ved Illerup Ådal” & “Ofringen” at Moesgaard Museum in Århus, opened October 10th 2014.
“Slaget (The Battle)” reconstructs an epic battle meant to have taken place around 400 AD.
The soundscape, which is accompanied by two widescreen animations by Mark Film, is generated using a custom designed 8 channel surround speaker configuration, including ceiling mounted speakers, plus 3 floor mounted transducers to generate individual zones of low frequency rumble.
“Ofringen (The Offering)” is an animation of the subsequent offering ceremony, in which the prisoners of war are humiliated, their clothes and weapons removed and thrown into the lake. Here the audio is delivered by a 4 channel surround setup.
A special thank you to Jels Vikingspil, who participated in making the roaring sound of 2000 battle-hardened warriors!
Client: Moesgaardmuseum.dk , Markfilm.dk